You are here: Home / News / Vander Plaats says Pence will not be heckled in Iowa 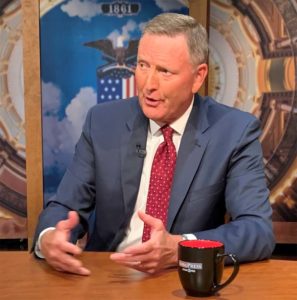 The Republican who competed against Kim Reynolds at the GOP’s state convention to be the party’s nominee for lieutenant governor in 2010 says Reynolds could wind up on a national ticket in 2024. If Donald Trump secures the Republican Party’s 2024 presidential nomination, Bob Vander Plaats — president and CEO of The Family Leader — suggests Reynolds will be in the mix as a potential running mate.

“As a matter of fact, I think she’d be a great presidential candidate right now,” Vander Plaats said today during taping of “Iowa Press” which airs tonight on Iowa PBS. “She has a lot of stock across the country of how she’s led during Covid, how she’s led through the racial unrest and a lot of other things. Iowa, in many ways, has been a model.”

Vander Plaats is hosting two potential 2024 candidates at The Family Leader’s 10th annual summit next Friday in Des Moines. Former Secretary of State Mike Pompeo and former Vice President Mike Pence are scheduled to speak. Pence was called a “traitor” and booed by a crowd of conservatives in Florida last month. Vander Plaats said that will “absolutely not” happen here next Friday.

“People like Mike Pence. He’s been a consistent conservative. He’s a man of faith,” Vander Plaat said. “He will deliver a message that our base will want to hear and I think he will be enthusiastically embraced at our Leadership Summit.”

Vander Plaats suggests voters will ask Pence why — in his role as vice president on January 6th — he certified Joe Biden won the Electoral College and the presidency.

“Everybody’s going to have their own hill to climb,” Vander Plaats said. “That may be his, but that’s up to him to answer that, not up to me to answer that.”

“In politics, as you all well know, the spoils go to the risk taker,” Vander Plaats said. “…Would Governor DeSantis stand down if Trump said: ‘I’m going to run again?’ I don’t know. I think DeSantis knows this is his most opportune time to launch a bid for president.”