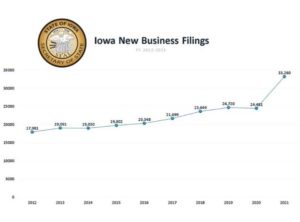 A record number of new businesses were registered with the state during the past 12 months.

Iowans starting a new business or changing ownership of an existing business must file certificates of organization with the Secretary of State’s office. Over the last 12 months, more than 33,000 new businesses were registered. That’s 25% higher than the previous record of business filings, set during the 2019 state fiscal year.

Secretary of State Paul Pate says this data shows there was “a substantial amount” of business activity in Iowa, despite the pandemic. Nearly 3,600 new business filings were submitted to the state in March. That total broke the single month record that had been just been set in January of this year.