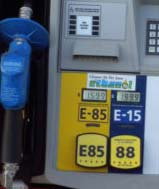 The U.S. House Biofuels Caucus is introducing legislation to make it clear the EPA has the authority to allow year-round sales of E15 and higher blends of ethanol. The bill would overturn a recent federal circuit court ruling that the EPA didn’t have the power to take that step.

“We’re going to get language changed and codified,” said Iowa Congresswoman Cindy Axne of West Des Moines, co-chair of he House Biofuels Caucus, “so that we don’t see any more of these court decisions based, really, off of old information.”

The other Iowans serving in the U.S. House — Ashley Hinson of Marion, Mariannette Miller-Meeks of Ottumwa and Randy Feenstra of Hull — have signed onto the bill as co-sponsors. Axne said adverse court rulings, like the one earlier this month that derailed year-round E15 sales, are based on information about ethanol that’s four decades old.

“These decisions are being based on old science and how ethanol first started or how biofuels first started, but they’re still making decisions on expansions or selling more of it based on those old scientific pieces of information,” Axne said. “That’s not relevant anymore and it’s strapping us from being able to get into markets that we need to get into.”

“We’ve been so strapped by old science and old laws. That’s really been one of the biggest problems and if we can get that changed, it will really open things up,” Axne said.

Automakers have been announcing plans to produce more electric vehicles, with GM planning to have 40% of its models be electric by 2025 and Ford aiming to offer electric versions of all its models by 2030. Axne said the conversion to electric vehicles isn’t happening overnight and the biofuels industry is the best way — now — to address air quality concerns in gas-powered vehicles.

“Our biofuels industry is ready and willing to go and if we can get the policies in place, we’ll get this across the country and start literally impacting the climate issues that we’re facing and put money in Iowans’ pockets,” Axne said.

Congressman Feenstra said selling E15 year-round not only benefits farmers and the ethanol industry, it gives consumers “a more affordable option at the gas station” and is “the cleanest form of liquid fuel on the market.”