You are here: Home / Crime / Courts / Groundbreaking warden retires after decades of work in corrections 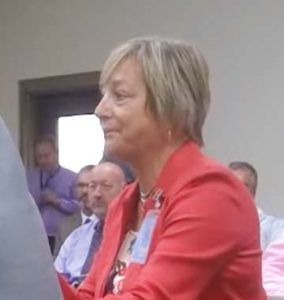 The first woman to serve as a warden at an Iowa prison for men has retired. Chris Weitzel spoke during the Board of Corrections meeting last week and reflected on her career that started as a corrections officer.

“When I started in 1982 at Mitchelville my goal was to be a warden. And I have had an amazing career with wonderful opportunities,” Weitzel says, “but those opportunities were there because I made those opportunities. I got involved in every single thing I could possibly involve myself in.”

Weitzel’s last position was as the interim warden at the Fort Dodge prison, and she had also been warden in Newton and Clarinda. Weitzel says there were many things she liked about the job. “We never have the same day twice. We make a difference in somebody’s life every single day. And I preach that over and over and over to my staff — because corrections is not a positive environment — and I think sometimes we get caught up in the negativity,” Weitzel says.

She says the staff doesn’t see the daily impact they make and underestimate their value. “And so I am constantly reminding staff ‘you make a difference whether you see it or don’t.’ and then, just our staff. We have the best staff in the state, and they are so dedicated to the mission of our work every single day, even in times of hardship,” Weitzel says.

Weitzel says the reality of retirement didn’t hit her until the Board of Corrections approved her replacement. “I have a lot of things that I am proud of through my career,” she says, “but I think probably the thing that I am most proud of is that I was the first female warden at a mens’ institution in Iowa. I hope that that has paved the way — I know it has paved the way for other women.”

Weitzel says she looks forward to spending more time with her family and being able to go on vacations without taking along an Ipad. Department of Corrections director, Beth Skinner, says Weitzel has laid a 38-year foundation in corrections that will never be forgotten.