You are here: Home / News / At least 12 tornadoes swept through Iowa on July 14 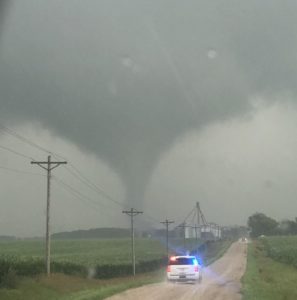 A line of severe storms swept through Iowa Wednesday, with trained spotters confirming more than a dozen tornadoes.

Farmsteads, the school bus shed in Lake City, the football stadium in Oelwein and the sale barn in Manchester are among the facilities damaged. Just before 8 pm, spotters reported a tornado on the ground southwest of Manchester and another touchdown to the north. Delaware County Emergency Management Director Mike Ryan.

“I thought: ‘Oh no, here we go. We’ve finally got that one night where we’ve got one that cuts a path through town on us,'” Delaware County Emergency Management director Mike Ryan said. “It affected some folks and then it just dissipated.”

There was minor damage to a convenience store’s building and vehicles on the lot. The Delaware County Fair is underway this week and about 1500 people were evacuated from the fairgrounds. Ryan said about five years ago, the fair board updated its emergency response plans.

“We did a two-and-a-half hour exercise where we challenged that plan this spring,” Ryan said, “and tonight’s an example of why we do this stuff.” 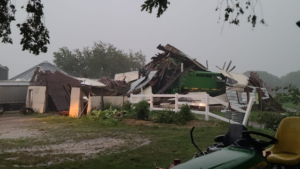 A tornado touched down west of Lake City shortly before 4 p.m.
“A lot of trees, most of the power lines are down,” said Eric Wood, city administrator in Lake City. “The school’s bus barn lost its roof. Bowie International lost a roof on a building and then it continued east out of town.”

A month ago, Dobson Pipe Organ Builders in Lake City was destroyed by fire and this is the second tornado in six years to hit the community.

“We feel like we’re a little snake-bitten in town right now with the Dobson fire and six years ago,” he said. “Luckily this didn’t do any more damage. We had our public works crews out right away. We had a couple of volunteers running some skid loaders and a couple of other things. We have the trees pushed off the roads.”

The storm system also produced some downpours and flash flooding in the state. More than 5.5 inches of rain was reported near Maxwell.