You are here: Home / Agriculture / A sweetcorn season that once was in doubt now underway in northwest Iowa 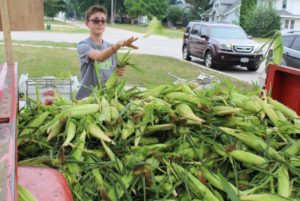 While some areas of the state had sweet corn available right after the Fourth of July, growers in northwest Iowa are just now rolling out their crop.

Lynn Buss has been growing and selling the Iowa favorite near Le Mars for the past 30 or more years and was worried the very dry conditions would leave him with no crop to sell this year.

Rains in the last couple of weeks saved the crop — though the plants didn’t all develop together. “Thus I have a range of maturities — and you can’t go right down the row and go plunk, plunk, plunk. You’ve gotta pick one good one and then skip three or four more and get the next one,” Buss says. “As far as recovery, it handled it pretty well, these hybrids are pretty tough.”

Buss says the most recent rains have been truly a blessing. “That’s going to take us a ways into our growing season — we ain’t out of the woods yet — but boy, just to cruise down these gravel roads and seeing how these crops are coming together, shading each other, conserving the moisture we’ve been given, I am really, really happy,” Buss says.

You have to plant sweetcorn at different times to ensure you have a continual supply throughout the season. He says the technique is to go at least seven to ten days between plantings or until the previous planting shows good emergence. “A lot of times it involves six to eight plantings. You go in there as early as you dare in April and plant consecutively after that,” Buss explains. “And then you might even throw in a Hail Mary planting around the Fourth of July which gives you a shot at late September sweetcorn.”

Buss is known as “Mr. Sweetcorn” around the area and he says everyone has after him about the arrival of the first ears.
“Just about can’t go anywhere without somebody bringing that on up,” he says. “I’m kinda taken aback by that — but there’s something about that first sweetcorn that is a very pleasurable experience for a lot of people.” Buss says he enjoys providing sweetcorn to people, but is thinking at 70 he may retire from the job in another year.