You are here: Home / News / 32 years ago United Flight 232 crashed in Sioux City 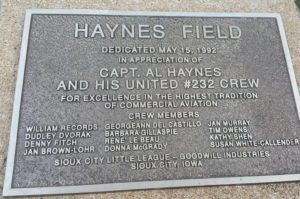 The plane took off from Denver and was bound for Chicago with nearly 300 passengers when it suffered hydraulic failure. An air traffic controller told Captain Al Haynes, the pilot, to do whatever he could to avoid hitting the city.

“There is a four-lane highway up in that area, sir, if you can pick that up,” the air traffic controller said and Haynes replied: “We’ve already put the gear down and we’re going to have to be landing on something solid, if we can.”

Due to the loss of hydraulics, the pilot could only make right turns and was flying the plane manually. Emergency crews were waiting at the airport. “He’s coming down real fast on the south end,” a man advised on the radio system used by crews on the ground.

The plane tipped just above the ground and a wing hit the runway first. The airliner cartwheeled down the runway, broke into pieces, burst into flames and skidded to a stop in a cornfield at the edge of the airport. One-hundred-12 passengers died, while 184 people on board survived.