You are here: Home / News / Volunteers to make foot coverings for homeless out of hospital’s cast-offs 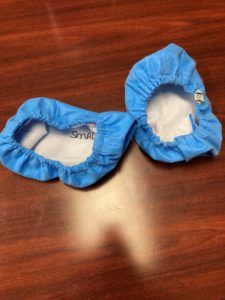 A Cedar Rapids-based nonprofit that served 40-thousand local homeless people last year will be the beneficiary of a community service project next week called Circle the City with Mercy.

Volunteers will be creating at least 500 pairs of protective foot coverings that will be donated to the Olivet Neighborhood Mission. Olivet director Julie Palmer says those hand-sewn galoshes will be a godsend.

“It rains during the summer and people’s socks get wet,” Palmer says, “and during the winter, being able to take these coverings and put them on the shoes that they actually have on and be able to keep people’s feet dry so they don’t get sick.”

The elastic-lined foot coverings will be made from “blue wraps,” a strong material that’s used to wrap sterile instrument trays at Mercy Medical Center.

“It’s weather-proof and it’s very multi-layered,” Palmer says. “They were originally just throwing them away and in the past, Mercy has done a couple of different things for us and for the homeless people. One of the things they’ve done is made mats out of them — homeless mats — so they can sleep on the ground or whatever and not get wet.”

It’s the ultimate recycling project as a product that was used in the healing process — which had traditionally been tossed in the trash — will have a second life providing comfort to the less fortunate.

“Yes, it is absolutely a great use,” Palmer says, laughing. “They always surprise me over there. They come up with these great ideas and I’m like, ‘Yeah!'” The Olivet Mission hosts a clothing closet and a food pantry that distributed almost a million pounds of food in 2020.

“There’s more homeless people here in Cedar Rapids since COVID and the derecho than a lot of people want to imagine,” Palmer says. “What we have been trying to do is find out what some of their needs are. The reality that we also know about the homeless, you’ll talk to some of them and they have no intention of wanting housing.”

The annual one-day volunteer effort will be held Thursday. Circle the City with Mercy is a tradition among three sister organizations: Mount Mercy University, the Catherine McAuley Center and Mercy Medical Center.

The project marks the anniversary of the arrival of the Sisters of Mercy in Cedar Rapids in July of 1875.