You are here: Home / News / Demolition starts on site of proposed soccer stadium in Des Moines 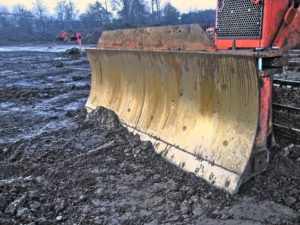 Demolition is underway at the contaminated property in Des Moines where developers are planning to build a professional soccer stadium.

The site is a mile west of Principal Park, where the Iowa Cubs play. Pesticides and car parts were made on the DICO property, leaving behind cancer-causing chemicals. EPA spokesperson Ben Washburn says once demolition is finished, a system will be installed to treat polluted groundwater.

“Going forward with this upgraded system, it will continue to both protect Des Moines drinking water and continue to clean up the groundwater,” he says.

The EPA has capped the area with asphalt and installed treatment wells to contain soil and water contaminated with industrial chemicals. Once all the buildings are down, Washburn says the site will be ready for redevelopment.

“We’re going to make sure that the site remains protective of the people that come and use it in the future,” Washburn says, “and part of that is making sure that the remedies that we have in place, whether something that is capped or the groundwater treatment system, remain effective and operational.”

Developers, led by a subsidiary of the company that owns Kum & Go convenience stores, are raising money to build a professional soccer stadium on the DICO site. State officials have approved $23 million in tax rebates for the project. The EPA plans to finish its part of the demolition next month. City officials have said the rest of the site will be clear by the end of the year.