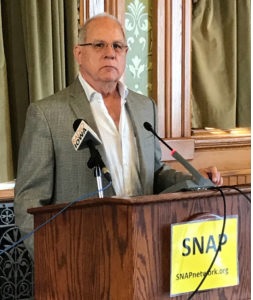 The Iowa native who’s been president of the Survivors Network of those Abused by Priests — known as “SNAP” — is stepping down from the post. Tim Lennon has been SNAP’s president for the past three years and a part of the group’s board of directors for a decade.

“During that time I’ve seen a dramatic increase in acceptance, acknowledgement of how widespread sexual abuse is within society,” Lennon says. “We have found that even with sacred institutions, like the Catholic Church, that sexual abuse is going on by clergy and that the hierarchy was covering it up.”

Lennon was abused by a parish priest in Sioux City when he was 12 years old. Lennon says after he publicly disclosed the abuse five decades later, 15 of his classmates came forward with similar accounts, “so getting public awareness and knowledge is very, very important to reaching those who are suffering in silence.”

Lennon credits an investigation by Pennsylvania’s attorney general with getting the Catholic Church to admit years of wrongdoing. In February of 2019, the Sioux City Diocese released a list of 28 priests who had been credibly accused of sexually abusing minors.

“The only reason that they’ve come forward with the list was they were compelled to do by public outrage,” Lennon says. “After the Pennsylvania grand jury investigated, they found 300 other clergy and over a thousand victims, so this compelled the Sioux City Diocese and other dioceses to release names.”

Iowa lawmakers changed state law this year, removing time limits for filing criminal charges against a person accused of sexually abusing a child. Lennon, who lives in Tucson, Arizona, has lobbied at the Iowa Capitol for that change, but he also wants to see the time frame changed for victims who want to file a civil lawsuit against someone who abused them as a child. The so-called statute of limitations requires child sex abuse victims to file lawsuits seeking damages before their 33rd birthday.