You are here: Home / News / A spelling competition at the O’Brien County Fair 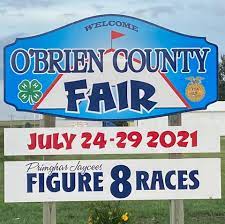 The spelling of the word “livestock” rather than the showing of cattle, sheep and hogs may earn some kids a ribbon at the O’Brien County Fair in Primghar next week. Carol McDowell, one of the coordinators of the event, says the spelling bee will start at 10 a.m. next Tuesday.

“We’re looking forward to seeing some spellers come,” McDowell says. “It will include anyone that’s completed second, third, fourth, fifth and sixth grade.”

McDowell says she and another woman from Primghar have attended the spelling bee at the State Fair.

“We just thought it would be something different and new for, especially, kids,” McDowell says. “…We hope it goes over well.”

This appears to be the first year for a spelling bee at O’Brien County’s Fair, but some other counties host competitive spelling events. The spelling bee at the Lyon County Fair starts at 3 p.m. this afternoon. The deadline for entering next month’s Iowa State Fair spelling bee has already passed.