You are here: Home / News / RAGBRAI riders from other states like Iowa’s hospitality 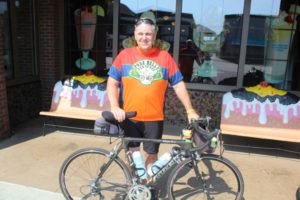 RAGBRAI headed out of Sac City today on the second day of the week-long trek across the state.

Riders started in Le Mars Sunday, and several say it is that warm hospitality that brings them back year after year to ride across the Hawkeye state. Randy Murphy is from the Louisville, Kentucky area and says his first ride was back in 2005, the last time Le Mars had hosted the event. He did the first ride as a challenge to see if he could.

“After a number of them, I realized there’s nothing I can’t ride in Iowa, I’ve been all of the hills, I’ve been on most of the roads it seems like. So now, its the people and the towns and the friends I meet along the way…just the people of Iowa,” Murphy says. 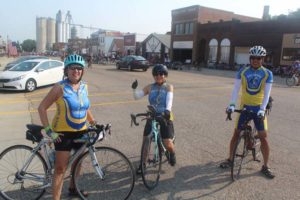 Ann McLaughlin is a member of the Delaware Biking Blue Hens. She also started riding RAGBRAI in 2005. The Delaware biker says she was most surprised by the “Iowa Nice” hospitality. “You know what surprised me the most is the friendliness of the Iowans. You guys open your homes to all of us — it would not happen on the east coast — so it is wonderful. It’s Iowa nice, we like it,” McLaughlin says.

McLaughlin says she enjoys the green corn and soybean fields, but there is something she doesn’t much care for.
” I do enjoy the scenery, I don’t enjoy the smell,” she says. “Our bus driver is from Iowa and he tells us that’s the smell of money.”

Riders are making their way to Fort Dodge for their overnight stay.