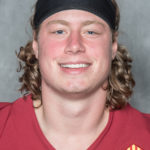 Iowa State linebacker Mike Rose was named to the Butkus Award watch list, announced today and given annually to the nation’s best linebacker.

A senior from Brecksville, Ohio, Rose was the Big 12 Defensive Player of the Year and an All-Big 12 First Team recipient in 2020 while leading the Cyclones to win over Oregon in the PlayStation Fiesta Bowl.

Rose, who has started all 38 games in his outstanding career, was named to multiple All-America teams in 2020 and has earned All-Big 12 recognition in each of his three seasons in Ames.

This past year, Rose had the most tackles in the Big 12 (96) and was credited with 10.5 TFL, ranking third on the team. The Cyclone star also led all NCAA linebackers nationally with five interceptions, the most by a Cyclone linebacker in school history.

Rose will enter his senior year with 248 tackles and 29.0 TFL, ranking 10th all-time in school history.