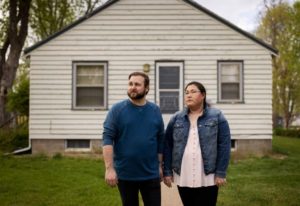 Tenants and landlords in Orange City are challenging the rental ordinance. (Photo supplied by plaintiffs.)

A judge is considering whether to allow an Orange City ordinance that lets the city inspect the rental homes without the owner’s consent.

Judge Patrick Tott heard the arguments in the civil suit Monday — and lawyer John Wrench told him the landlords and residents he represents believe those civil warrants are a violation of the Iowa Constitution.

“My clients’ objected to those searches in writing and the city responded in writing that it will never-the-less search my clients’ home pursuant to the ordinance. The city’s sole enumerated remedy in the ordinance is using civil warrants not supported by individualized probable cause,” Wrench says.

City Attorney Zac Clausen says there is no reason for this group of landlords to sue. “I believe the city has conducted inspections — although I would need to clarify that with my client. But as it relates to the plaintiffs — as the court is well aware — we have not conducted any of the inspections at the plaintiffs’ residences,” Clausen says.

He says there is no basis for a lawsuit. “While it is my understanding that the city intends to attempt to attain an administrative search warrant to enforce their ordinance — the city may very well choose not to ever inspect any of these plaintiffs’ properties,” according to Clausen. “For those reasons, we believe that our arguments about ripeness and standing are the reasons this case should be dismissed at this point.”

Judge Tott says he will issue a ruling on the case at a later date.