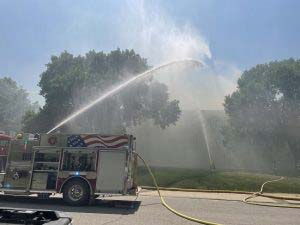 It’s still unclear what caused fire to break out Tuesday afternoon on the roof of Atlantic’s middle school.

The flames didn’t reach inside the building but there’s significant water damage throughout most of the school.  School was not in session and no injuries are reported. Witnesses say a new roof was being installed and the roofers left for lunch.

A crew doing tuckpointing on the sides of the building saw the smoke and called 911. Atlantic Superintendent Steve Barber says he’s grateful for the quick response.

“We’ve gotta’ feel blessed about having so many quality people that can attack an emergency like this,” Barber says. “If we didn’t have the likes of our Atlantic Fire 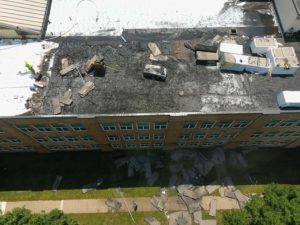 Department, our Cass County Sheriff, our local police department, and then surrounding fire squads getting here quickly, it could have been a heck of a lot worse.”

The fire marshal is evaluating the cause of the fire and asks everyone, including staff, to stay away from the building, which is closed for clean-up.

The school’s roof is 12-inch thick concrete. It was installed in the early 1930s as part of the Works Progress Administration projects under FDR’s administration. The part that was burning was apparently the fiberboard placed on top of the roof liner.