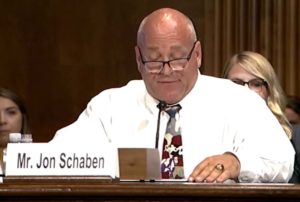 Two Iowans spoke at a Senate hearing on cattle markets Wednesday. Jon Schaben, the owner of Dunlap Livestock Auction, says something needs to be done to help independent producers.

“With an increasing prevalence of extreme market shifts and the limited ability of producers to mitigate market risks in the cattle industry, it is imperative that we uplift the concerns of those in the production sector for this Senate Judiciary Committee hearing,” Schaben says. “Simply put, the beef supply chain begins with and relies upon thousands of independent cattle producers.”

He says the money those producers receive has declined dramatically. “In 20015, 51-and-a-half percent of the consumer dollars spent on beef returned to producers. In 2020, that figure dropped to 37 percent. That’s been a steady decline from what the producers are getting from what the retail dollar is,” Schaben said.

He says the large meatpackers controlling the industry are a concern. “Cattle producers work hard to manage inputs, mitigate risks, and raise cattle that ultimately provide the high-quality beef demanded by meatpackers, retailers, and consumers,” according to Schaben. The greatest fear of independent cattle producers is to lose their livelihoods to meat-packing efficiency, an example of vertical integration. We’ve witnessed vertical integration in the swine and poultry industries — so we know what that path is like.”

Shane Miller of Sioux City is the group president of Fresh Meats at Tyson Foods. He had a different view of what is going on with beef prices. “The present divide between live cattle and boxed beef prices is not the result of a consolidated industry, lack of competition or the cash markets,” according to Miller. “The concentration of ownership within the meat processing industry is virtually unchanged over the last 30 years. Instead, the present spread between live cattle and beef prices has everything to do with supply and demand.”

He says the shutdown of plants caused by the pandemic made the situation worse. “This led to an oversupply of live cattle and an undersupply of beef — all while demand for beef products is at an all-time high,” Miller said. “So, it should not surprise any of us that as a result, the price for live cattle fell, while the price for beef rose.”

Miller says Tyson provides several options to producers. “Producers decide for themselves how to best market and sell their cattle. With Tyson they have a variety of options available — whether that be negotiated cash market, forward contracting, or tailored alternative marketing agreements — or AMA’s,” he said.

Iowa Senator Chuck Grassley is on the Judiciary Committee and says had strong reservations about consolidation within agriculture and the livestock industry for more than 20 years.