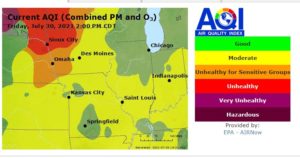 Almost all of Iowa has been under an air quality alert today as smoke from wildfires has created a hazy sky.

National Weather Service meteorologist, Rod Donovon, says the upper airflow pulled the smoke in. “Over the last 24 hours as a lot that western smoke from the wildfires across the northwest U.S., and especially into western Canada as well — we’ve gotten into more a what we consider a northwest flow, and it allows that smoke to diver back across Iowa,” Donovon says. “We’ve even seen some of that smoke actually mix toward the ground itself.”

It’s the first day this week that at least part of Iowa isn’t under a heat advisory. Donovon says one benefit of the smoke in the air is cooler temperatures. “Actually filters some of the sunshine and can certainly keep temperatures down a few degrees…even today we are down two to three degrees, just basically due to this filtered sunshine,” he says.

He says the airflow also brings in some cooler air, and it is a pattern that is going to stick around a bit. He says we will be in the northwest flow for the next several days and probably have the smoke move into Iowa into the middle of next week. Donovon says the smoke isn’t an issue until it mixes down. “So, hopefully, we can keep most of this smoke aloft away from where it can cause respiratory impacts and things like that,” Donovon says.

The Iowa DNR keeps track of the air quality and you can find out more on their webpage.