You are here: Home / News / Construction underway on first Habitat for Humanity home in Hawarden 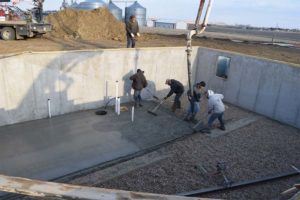 Early construction on the Siouxland Habitat For Humanity home in Hull. They are now working on their first home in Hawarden. (HH photo)

The Siouxland Habitat for Humanity chapter has started the construction of its first home in Hawarden.

Siouxland Habitat for Humanity Director, Anne Holmes, says there’s a great need for safe and affordable housing, and that Hawarden has welcomed them with open arms.

They held a groundbreaking late last week where home recipient Heather Sabin was on hand. She says she’s excited to get all the help from the community, and most of all is excited for her kids to be able to grow up in the home.

Holmes says Heather Sabin’s enthusiasm and gratitude is overwhelming saying Sabin is the kind of person when you’re having a down day all you have to do is call her and her family up and just listen to the excitement in their voices, she says it automatically fills your bucket.

Sabin says she can’t wait for one thing. “To move in…start new memories for my kids. It’ll be good,” she says. Sioux County Habitat for Humanity Director Kurt Franje is excited to be building a home in a new community

He says they are “super excited” to be able to start another home and share God’s lover with one another. This is the first time Sioux County Habitat is building two houses in the same year. Franje says he wasn’t sure how it would work out — but the other home in Hull is ready for the sheetrock to be taped.

“That one is in a very good spot and we’ll be able to start this one and get it started before winter, there’s plenty of time to do that,” Franje says. Sioux County Habitat for Humanity has plans to build another second home in Alton next year, and they’re working with city officials in Hospers to possibly build one there in 2022.

Franje says they could use more volunteers — and anyone interested in helping with the Hawarden project can contact Siouxland Habitat for Humanity through their website: siouxlandhabitat.org, or through their Facebook page, or call the Hawarden City Office.