You are here: Home / News / Areas that needed it most didn’t get much rain in July 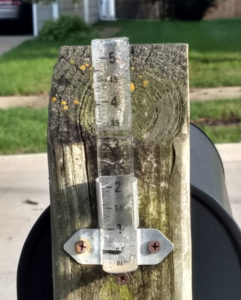 The driest areas of the state continued that way in July.

The finals days of July saw some blast furnace-type temperatures — but State Climatologist Just Glisan says they weren’t enough to push the month above average.

He says when you combine them with the below-average days — things evened out to right around the average July temperature of 74 degrees. Glisan says some two to four-inch rains in the last few days of the month gave some areas above-average precipitation. But other areas of the state missed those quenching rains.

“North of I-80 and east I-35 had drier than average conditions for the month. Precipitation deficits around Waterloo and Cedar Rapids, anywhere from two to four inches below average,” Glisan says. He says some areas just haven’t been able to make up the precipitation shortfall through the first seven months of 2021.

Glisan says the dry pattern has done a total flip of the situation we had when 2018 and 2019 combined were the wettest two-year period since records have been kept. He says the calendar year temperature numbers don’t show anything unusual.

Glisan says the average temperature of the first seven months never gets one or two degrees above or below the average. Glisan says the July tornado outbreak that saw between 20 and 22 was the biggest blip on the record book — as there are an average of just seven confirmed tornadoes in the month.