You are here: Home / Sports / Dubuque woman one of the winners for tickets to the Field of Dreams game 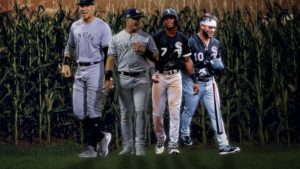 Tickets to next week’s Major League Baseball game at the Field of Dreams site in Dyersville are a hot commodity some Iowans have found out they were chosen in a drawing for tickets.

Nikki Glatt of Dubuque is one of them. “I was shocked and then I immediately called my nephew because he was the one who said ‘you need to register,’ and he is actually out at Yellowstone National Park right now visiting,” she explains. “So, I was like ‘sorry to interrupt your vacation, but guess what I qualified for?’ He was like, ‘that’s awesome, sell them’ but I can’t because they are non-transferable. He was like ‘okay take me’.”

Iowa residents had from July 16th through the 23rd to enter a lottery drawing for a chance to purchase tickets for the highly-anticipated game between the New York Yankees and the Chicago White Sox. They’ll be playing in Iowa’s first Major League Baseball game under the lights in the newly-constructed stadium near the Field of Dreams Movie Site next Thursday night, August 12th. Glatt had an appointment to try to purchase tickets at 11 a.m. – and was able to get two tickets for $375 each. She says she’s had a lot of people reaching out to her willingness to buy them – even though it appears tickets are non-transferable.

“It’s crazy how many people are Facebook messaging me, saying…’hey this is my story, can I please purchase your ticket?’ It’s insane. Or the number of text messages I’m getting saying from people like ‘hey I’ll go with you.’ Strangers on Facebook, and then it’s friends and family texting me,” Glatt says.

Eight-thousand fans will be at the game itself – and the Dyersville Chamber says Major League Baseball isn’t even sure how many people will be coming to Dyersville for the event or the “Beyond the Game” two-day festival that the community will be hosting next Wednesday and Thursday. Glatt says she’s not looking forward to the crowds, but she is excited for the game itself – even though she’s a Braves fan. She says her cousin sent her photos saying she had Yankees stuff, but Glatt says she will probably wear her Braves stuff.

The Field of Dreams game between the Yankees and the White Sox will be aired live on FOX next Thursday night, August 12th at 6 p.m., with an official MLB viewing party at the “Beyond the Game” Festival in Dyersville’s City Square. For more information on the “Beyond the Game” festivities, check out beyondthegameiowa.com/schedule.