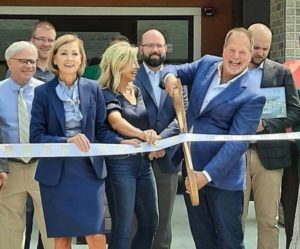 Iowa Governor Kim Reynolds attended the dedication of an apartment complex in Sioux City  Tuesday,  and talked about the importance of adding more modern housing to attract new workers to the state.

She also talked about how the state is ready to help those facing eviction as the federal rent moratorium comes to an end. “Last year in 2020, so between May and December, we set up a rent eviction program as well as a mortgage program and utility program, and allocated close to 45 million dollars that helped keep a lot of Iowans in their home,” Reynolds says.

The program is behind in getting the money out and Reynolds says state Economic Development Authority director Debbi Durham has reached out to the Chief Justice of the Supreme Court. “To let them know with Legal Aid that it is in the process and not to be rash in following through with the evictions until we can work through with the backlog. But she hoped….certainly by the end of this week — that the backlog will be filled,” according to Reynolds.

Reynolds says the new multi-plex in Sioux City is one of the things that will help attract much-needed workers. “That’s one of the reasons that I ended the 300 dollars a week supplemental unemployment payments,”Reynolds says. “Because it was a disincentive for people to go to work — and when we have more job openings than we have people on unemployment — we need to help Iowans to get the skills to fill the jobs.”

She says the Economic Development Authority is working on a recruiting campaign. “That really showcases what we have to offer here in the state of Iowa. So we’re kind of finalizing that right now. That will go nationally,” she says.

The “District 42” Sioux City complex features studio, one, two, and three-bedroom options, plus an outdoor pool, community building, and a fitness center. The developer says it is already two-thirds full.