You are here: Home / Crime / Courts / Law officers connect with community at Manchester ‘National Night Out’ 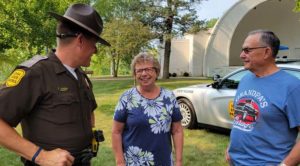 Cities across the state hosted “National Night Out” events Tuesday and the event in Manchester was sponsored by the Delaware County “Back the Blue” group.

Iowa State Patrol Public Resource Officer Jon Stickney, explains its goal. “It’s a group that came together who throughout recent events in the past year with law enforcement being degraded…and those relationships being torn apart, we’ve been invited to come and build those relationships back with the community,” Stickney says.

Stickney says the relationships between law enforcement was never strained like they were in other areas — but he says some of the messages did have an impact. “Parts of it like with the children and staff — what they see on TV, what they hear — it’s been tough on those children and those relationships have been lost throughout the time,” he says.

Stickney says it’s important to work to keep the community relationships are healthy. “Law enforcement from the history of policing from the beginning –it’s been about community policing. And so, we still want to keep that, we want to garner that and make sure the future is about that,” according to Stickney. “Yeah, we have to do our job sometimes, the tougher parts, but this is what it is truly about — being with the community and building the trust.”

State, county, and local law officers were on hand to participate in various activities. That included Manchester Police Chief Jim Hauschild — who was first up in the dunk tank, getting dunked half a dozen times. He too says interacting is an important part of an officer’s job.

“We want to get people to know us away from work. That we’re here, we are just average people like everybody else. You can approach us, you can talk to us, we’re friendly,” Hauschild says.

The Chief says all the proceeds from last night’s “Back the Blue” event in Manchester are being donated to Linn County Deputy Will Halverson. Halverson was shot during a robbery in Coggon earlier this summer.