You are here: Home / Human Interest / You can watch creation of George Washington Carver in LEGO bricks at Iowa State Fair 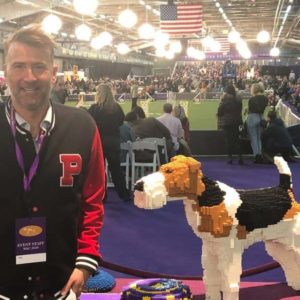 An Iowa State University graduate whose company builds life-size sculptures out of LEGO bricks will create a tribute to one of the Ames institution’s most famous graduates during the Iowa State Fair.

Chris Ihle, who runs We Build U, was hired by his alma mater to create a LEGO George Washington Carver, but the innovative inventor won’t be depicted just standing there.

“We definitely didn’t want to build him as a Civil War statue because he’s a person,” Ihle says. “We found a black-and-white photograph that shows him in a lab coat, working with the beakers. It really captures the science of what Washington Carver did.”

Ihle and three other team members will spend an estimated 300 hours during the fair making the sculpture — which will use about 44,000 LEGO bricks. We Build U just marked its third anniversary and Ihle has a client list that ranges from rappers to pets to presidents.

“I surely didn’t invent LEGOs and I surely didn’t invent self portraits, so I just combined the two,” Ihle says. “Nobody ever wakes up and says, ‘Today, I’m going to go buy a lifesize LEGO statue of myself or a loved one,’ and we’re the only place in the world that offers that.” Ihle has created LEGO sculptures for musicians, reality TV shows, the Westminster Kennel Club Dog Show, the Ultimate Fighting Championship — and even Iowa native opera singer Simon Estes.

“If you’re awesome, we can build you and if you’re not awesome, go do something awesome and then we’ll build you,” Ihle says. “If you can’t do anything awesome, go ask your mother because I’m sure she thinks you’re awesome and in that case, we’ll build your mother in LEGOs. And I guarantee you, she’s going to cry when she sees it because everybody loves themselves and everybody loves LEGOs.”

Carver was Iowa State’s first black student and faculty member. This year marks the 125th anniversary of Carver receiving his master’s degree at ISU. His research resulted in the creation of more than 300 products from peanuts, more than 100 products from sweet potatoes, and hundreds more from a dozen other plants native to the South.

Fairgoers will be able to see the statue as it’s being built in the fair’s Varied Industries Building and once the fair is over, the LEGO Carver will go on display on Iowa State’s campus in a location to be determined.