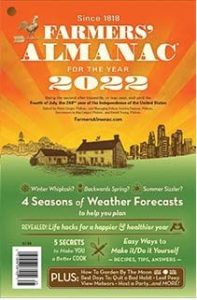 While forecasters say Iowa’s high temperatures will be back in the 80s and 90s for the next several summer days, it’s hard to think about the foul, frigid winter that’s ahead — but we all know, it’s coming.

Peter Geiger, editor of the Farmers’ Almanac, says the 2022 edition will be out next week and its winter weather outlook for Iowa and the Midwest isn’t pretty. “It’s going to be colder than normal and in terms of the snowfall, we talk about a foot of snow January 8th through the 11th,” Geiger says. “We talk about a big blizzard on the 20th through the 23rd. I think your average in Iowa is somewhere in the 30-inch range and I think you certainly will get that.”

The Farmers’ Almanac forecast is detailed and Geiger says some dedicated readers plan their calendars around it. He says “numb’s the word” as for the bone-chilling predictions in the looming winter. “We talk about a real big storm December 1st through the 4th, a real blast of Arctic frigidity with temperatures minus-20 around Christmas, then we talk about a mild beginning of January, heavy snow in the middle of January, a big storm at the end of January and then, this is the flip-flop, in February, it’s going to be cold but we don’t talk about a lot of storms,” Geiger says. “Then in March, we talk about a big storm March 4th through the 7th that will hit you and then a late season storm on April 24th to the 27th.” 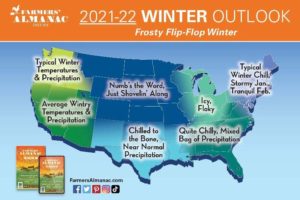 That late-season storm may just be rain, not snow, he adds. While some meteorologists on TV may not be comfortable predicting the weather farther out than several days, Geiger says the Farmers’ Almanac has been working on forecasts up to 24 months out — and they’ve been doing so for more than 200 years.

“There’s a mathematical formula that was devised by our first editor, David Young back in the 1800s, because farmers needed to know about the weather,” Geiger says. “We apply sunspot activity, planet positions, the effect the Moon has on the Earth, and that allows us to do our weather two years in advance. Some weather people pooh-pooh it, but last year, when Texas had that cold spell, that was in the Almanac.”

The 2022 edition of the Farmers’ Almanac includes specifics about the many predictions it got right for the past year. Geiger admits, they don’t hit every single storm on every single date, but says if you give him a few days of leeway, it’s remarkably reliable.

Founded in 1818 and still based in Lewiston, Maine, the Farmers’ Almanac contains weather predictions for the entire four seasons of 2022 as well as all sorts of information on gardening, cooking, home remedies, folklore, managing your household, living in harmony with nature, and more.