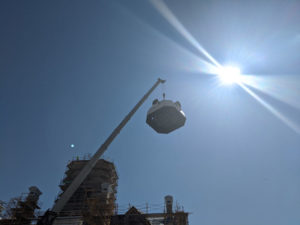 It took about 10 minutes to lift the new dome on top of the Marshall County Courthouse in March of 2020. (KFJB photo)

It’s been more than three years since a tornado seriously damaged the Marshall County Courthouse. Repairs and renovations continue, but due to the age of the building, the pace has been slow. A couple of weeks ago, FIRST ONSITE, the general contractor, pulled out of the project.

This week, Building and Grounds Superintendent Lucas Baedke told the Marshall County Board of Supervisors four other firms were prepared to jump in and take over, but Breiholz was already on site.

“They would probably be the only outfit that would actually be a typical general contractor role, because they are already here and they already hold that,” he said. “If we brought in one of the three other outfits, they would be more of a construction management role.”

The Supervisors selected Breiholz to keep the project moving forward. County Auditor Nan Benson noted that subcontractors on the project have continued their work.

“They’ve been very good,” she said. “…and it’s because they are more local.”

This latest delay has pushed the anticipated reopening of the Marshall County Courthouse to early 2022.