You are here: Home / Crime / Courts / Police dogs and handlers get special training in Sioux City 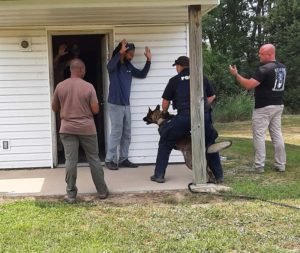 Around 45 police dogs and their handlers from around the Midwest are in Sioux City getting advanced training.

Sergeant Jay Nix of the Marion County Florida Sheriff’s Office is one of the trainers and COO of K-9’s United, a non-profit organization that works with law officers and their dogs.

“So our job initially when the foundation started was things like equipment. As we progress through that we realized there were some shortfalls in these guys using some of the training equipment we were providing,” according to Nix. “We realized they did not have good home field advantages — as far as quality training in their hometown, quality training in their agency — there’s a lot of shortfalls in that area.”

Nix has been in law enforcement 21 years and a dog handler for 18 of those years. His group is providing advanced training to establish K-9 units from Iowa, Nebraska, and Wisconsin. “We’re providing problem-solving from all areas of patrol work — meaning apprehension, criminal apprehension, which is criminal apprehension. biting, tracking, searching, any type of building search, area searches article searches, which is evidence recovery, narcotics detection, explosive detection. Whatever their need is, is what we are providing,” Nix says.

Sergeant Jake Noltze of the Sioux City Police Department is one of the trainees. “It’s humbling, because when we train with the same group we are ‘yeah we know what we are doing and we are doing really well,’ and then you have people who are extremely competent and professional come in and say ‘no, there is a better way,” Noltze says. “And that better way then leads us to be more professional when we deal with the civilian population, so our dogs than are more valuable to the team, to the police department and to the community,”

The training is not free, and was sponsored by a Sioux City company. The four-day training session wraps up today at the Sioux City police training center.