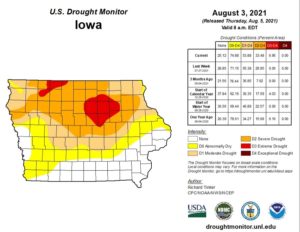 The state climatologist said the areas in the northwest and east-central Iowa have “missed out on widespread, heavier rains.” According to the National Drought Mitigation Center, which produces the maps, conditions deteriorated significantly in several large patches in Iowa and Minnesota over the past week.

Most of these areas have had up to six inches less than normal rainfall during the past 60 days and up to eight-and-a-half inches short of normal since early May.