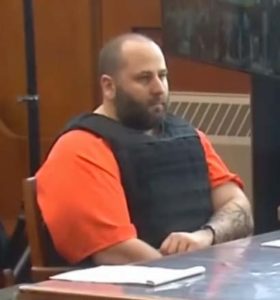 One of the two inmates accused of killing a nurse and corrections officer at the Anamosa prison in March pleaded guilty today to all the charges against him.

Thomas Woodard reached a plea agreement on two counts of first-degree murder, second-degree kidnapping, attempt to commit murder in the deaths of correctional officer Robert McFarland and nurse Lorena Schulte, the injuring of another inmate.

In the hearing streamed by KCRG TV, Judge Fae Hoover explained to Woodard that he is giving up his right to a trial on the charges by making the pleas. She then proceeded with the “With regard to the killing of Robert McFarland, I ask you at this time, Thomas Allan Woodard Junior, how you plead to the offense of murder in the first degree: guilty or not guilty?” Hoover asked. Woodard responded, “Guilty.”

The judge continued with the second count of murder. “With regard to the killing of Lorena Schulte, a Class D Felony, how do plead, guilty or not guilty?,” she said. Woodard replied “Guilty.” The judge followed the same procedure for the other counts and Woodard answered guilty to each charge.  He will be sentenced to life in prison, but his sentencing date has not yet been set.

Under the agreement, he will serve his life sentence in his home state of Nebraska. The other inmate involved, Michael Dutcher, has pleaded not guilty and waived his right to a speedy trial.