You are here: Home / News / The Bix is back honoring Davenport jazz legend

After last year’s 49th annual event went virtual due to the pandemic, the Bix Beiderbecke Memorial Jazz Festival is marking its golden anniversary with in-person live music this weekend in Davenport.

Steve Trainor, president of the Bix Jazz Society, says their 50th fest got underway last night and is featuring five concerts of five hours each over three days with an all-American line-up of bands.

“We do have ones from Denver, Minneapolis, Toledo, St. Louis, Chicago, Des Moines,” Trainor says. “So, a total of eight professional bands, two of which are all-star groups from some of the other bands, and then the ninth is our Bix Beiderbecke Youth Band.”

Bix, a Davenport native, was a jazz pioneer on the cornet and piano nearly a century ago who died at age 28 in 1931. His music remains popular around the globe and the festival has, in pre-COVID times, attracted Bix lovers from as far away as Australia, Japan and Europe. For this 50th year though, Trainor says far fewer people are traveling. 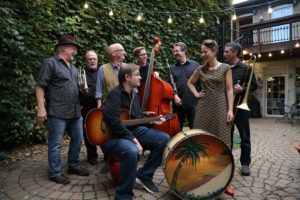 “There was a time years and years ago when there wasn’t this thing called the internet and we didn’t have a festival every other weekend,” Trainor says. “We had 10,000 people in the park, sometimes more. We’re averaging about 3,000 (a day) and we have to be happy with that, especially considering last year. We’re just looking forward to seeing real people and to hearing real music.”

Every effort is being taken, he says, to make sure this year’s festival is a *safe* festival.
“There’s no mask mandate at this point in the state of Iowa, but we have masks that we can give people,” Trainor says. “We have seating for two, seating for four, and you can spread out as there’s like 700 seats. There’s hand sanitation stations.”

Most of the concerts are being held at the Rhythm City Casino’s Events Center in north Davenport, though a few select shows will be performed at the Putnam Museum and at the Oakdale Cemetery, where Bix is buried. Fans will also want to visit the Bix Museum in the lower level of the River Music Experience in downtown Davenport.

It’s dedicated to telling the story of the hometown hero through recordings, photos, videos, storyboards, letters and his instruments.