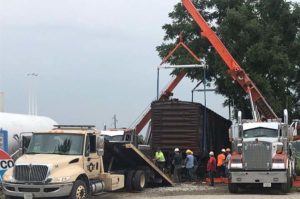 An aging Rock Island Railroad boxcar that’s sat on the tracks beside an Atlantic gas station for decades is finding a new home about 130 miles to the northwest at the Sioux City Railroad Museum.

Keith Olsen, who owns the Olsen’s BP station, says he doesn’t know the full history of the railcar, but he knows it was used to store things for more than 60 years. “Delmer Patterson used to use this Rock Island car for storage for Standard Oil chemicals way back when,” Olsen says. “He’d pull it down the siding, have a semi come in and load chemicals and then he’d push it back down the rail. He had a little dock built and he’d sell farm chemicals out of there probably back in the ’60s.”

A friend of a friend of the museum recently spotted the railcar and arrangements were made to move it to Sioux City. Gary Richter, with Richter and Sons Towing in Atlantic, oversaw the loading of the railcar onto a flatbed truck this week.

“That railroad car has been sitting there since I was a young kid, which is about 40 or 45 years ago,” Richter says. “Myers Towing is going to haul it up there. We’re here loading it. We’ve got our rotators out, we’ve lifted it in the air. They’re going to back a trailer underneath of it, chain it down and transport it to Sioux City where it will spend the rest of eternity, I suppose.”

The car weighs about 30,000 pounds and is what was referred to as a “Tool Car” in the language of railroaders. Olsen says the Siouxland museum is the third to have contacted him over the years about the car, but it was the first to follow through on making the arrangements to adopt the elderly rail relic.