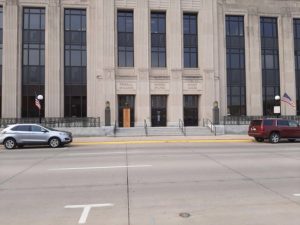 A Sioux City man is facing several charges after a window-breaking spree in downtown Sioux City.

Officer Andrew Dutler says 37-year-old Ryan Redler was hitting the windows with a hammer. He says Redler broke windows at various businesses and also broke a window on the west side of the police department. Windows on two doors at the federal courthouse were also shattered.

Redler was arrested and taken to the hospital for treatment of cuts to his hands and arms from the broken glass. He faces four counts of second-degree criminal mischief. “He is also being charged with two counts of assault by an inmate — specifically bodily fluids. He bled all over some officers of ours, as well as EMS staff,” Dutler says.

A charge of fifth-degree mischief was also tacked on and Redler is being held on a 20-thousand dollar bond in the Woodbury County Jail.