You are here: Home / News / A year later, Marshalltown reflects on a derecho after July ’18 tornado 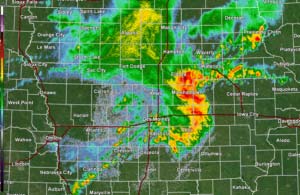 The derecho that struck Iowa a year ago hit an area of the state that had been hit by a tornado just 25 months earlier.

Marshalltown City Administrator Jessica Kinser says before she was able to see for herself, the city’s police chief described the magnitude of the derecho’s damage.

“Chief Tupper had sent me a text message that said it looked like an entire tornado hit the community,” she says. “That had such an emotional impact because I knew what the tornado was and how bad that was.”

Marshalltown Mayor Joe Greer’s initial assessment was that Marshalltown looked “like a war zone — again.” Marshall County Emergency Management Coordinator Kim Elder led the process of assessing the damage of a second massive disaster — in the middle of a pandemic.

“I kind of felt sorry for all of us involved,” Elder says, “because it kept hitting one, two, three.”

A year after the derecho, Marshalltown officials say the community has bounced back stronger than ever. Dorrie Tammen manages Riverside Cemetery in Marshalltown, one of the areas that was hardest hit a year ago. She admits there’s a sense of déjà vu whenever the skies darken.

“I used to be one of those people who kind of liked thunderstorms,” she says, “but now they don’t seem as fun as they used to be.”