You are here: Home / News / Dyersville hosting many activities prior to MLB game 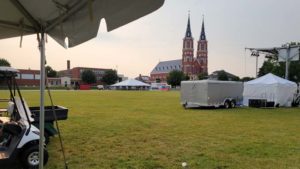 Tents set up in Dyersville for pregame events. (KMCH photo)

The pregame events begin in Dyersville today in preparation for the Major League Baseball game on Thursday night at the Field of Dreams Movie Site.

Dyersville Chamber Director Karla Thompson, says the festivities planned for visitors are called “Beyond the Game.”
“MLB has done temporary stadiums before — but they’ve never done a community festival — so we really don’t have anything to compare it to. From the calls that we’ve been receiving at the Dyersville Chamber, there’s going to be a lot of people in town,” she says. The 8,000 fans who will get tickets to watch the New York Yankees and Chicago White Sox face each other are twice the population of Dyersville.

The fan events include a showing of the movie “The Field of Dreams” on the big screen in Dyersville’s City Square tonight at 7.
and another showing at 6 Thursday night. They also have what’s called the “Experience Iowa Zone.” She says it is businesses and organizations that represent Iowa and they will give away samples and hold demonstrations for people who may have never been to Iowa before.

Thompson says they’ve gotten a lot of questions in the past week wondering if tickets are still available – and regardless if people are going to the game or not, they’re still planning to come to Dyersville. If you want to stay in a hotel — plan on some driving.
“Basically, an hour around is full. We do have residents who are opening up their homes so if someone does want to come last minute — who do have rooms available,” Thompson says. You can call the Dyersville Chamber to find out about those rooms.

The game was postponed by the pandemic last year – so the anticipation among businesses for the events today and tomorrow is high. “We have been preparing for two years, so they are excited, there’s a lot of adrenalin going. They’ve been printing t-shirts, and getting their stock in and products, their windows are decorated and they are excited and ready to entertain our guests,” according to Thompson.

The severe thunderstorm that moved through Dyersville on Tuesday afternoon caused some damage to the “Beyond the Game” festival set-up at Commercial Club Park. The Park says three ten-by-ten foot canopy tents were destroyed, along with the production tent for the concerts. The stage was also damaged. Community members came to the rescue by letting the park borrow canopy tents for the event. If you’re interested in checking out some of this week’s festivities, you can find more information online at BeyondTheGameIowa.com.