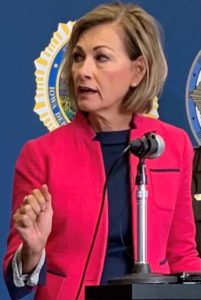 “We’re trying to take the money that we’re getting and really plug it into infrastructure — into water and sewer and bridges, so we have that opportunity to do that already with a lot of the money that’s coming in,” Reynolds says, “so I’m just concerned that this is another layer.”

Iowa’s two Republican U.S. Senators split their votes on the plan. Chuck Grassley voted yes and Joni Ernst voted no. Reynolds made her comments Tuesday during a visit to Sioux Center, on the one-year anniversary of the derecho that swept through Iowa.

“I’m telling you that it’s hard to believe it’s been a year, but I can tell you without hesitation that I saw the goodness and just the tenacity and kindness of Iowans shine through in the middle of another disaster — in the middle of Covid-19,” Reynolds said, “and so Iowans have had quite a year and we’ve come through it in a really good position.”

Reynolds also made stops in Cherokee, Sheldon and Sibley yesterday.