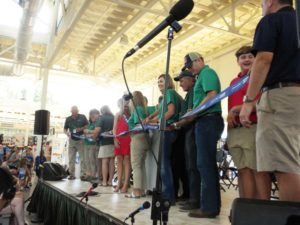 The Governor and State Fair Board members cut the ribbon to open the fair. (Radio Iowa photo)

People flowed into the gates when they opened this morning as the Iowa State Fair returned after being canceled in 2020 by the pandemic.

Fair CEO Gary Slater spoke at the opening ceremonies. “I can tell you it was a hard 14 months, but we weren’t sure we would be here today — but we are resilient, we are resourceful, and I can confidently say that we are back,” Slater says.

Governor Kim Reynolds also spoke. “Yeaah, welcome back to the Iowa State Fair,” she says. The governor was cheered and told the crowd she has already taken several steps and is counting them to be sure she gets enough exercise to offset anything she eats.
“I am tracking my way so I can eat the rest of the afternoon. It is a strategy that we all should be taking,”Reynolds says.

She spoke with Radio Iowa after the opening ceremonies and says she expects huge crowds during the 11-day run. “It’s so exciting,

it’s just a tradition that families look forward to every year and generations of families,” according to Reynolds. “And it’s not just in Iowa, it’s all across the country and really around the world. People know about the Iowa State Fair and they really look forward to coming,” she says.

Some critics say the State Fair brings too many maskless people together and risks the spread of COVID. “We did RAGBRAI and we did Hinterland that had thousands and thousands of people and I didn’t see a lot of masks there. We need to do it safely and responsibly — Iowans are doing that,” according to Reynolds.

COVID case numbers have gone back up — as have hospitalizations — but Reynolds says this is not the same as the height of the pandemic. “You have to put it in context though of what we saw back in December and November when we actually peaked. At 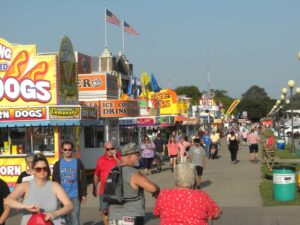 that time, probably 37 percent of our hospitalizations were COVID-related. And I actually had hospitals reaching out and saying we are on the brink and we are afraid if something would happen we wouldn’t have the capacity to take it.”

Reynolds says the current infection rate is still well below the peak. “We’re not even at three percent right now — so yeah they’re rising — but the difference between then and now is we have a vaccine,” Reynolds says. “And the deal with the vaccine is that it prevents people for the most part being hospitalized or death. We are not seeing it correlate to the deaths like we did.” She says that’s especially true among the elderly population.