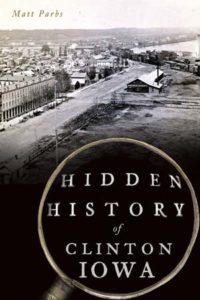 The director of the Sawmill Museum in Clinton has written a book about Clinton’s 19th century “lumber kings.”

The title of Matt Parbs’s book is “Hidden History of Clinton, Iowa” and he says it deals with some of the myths about the city’s position as a leader in the logging industry.

“You always hear about how we had the most millionaires per capita or that we were the lumber capital of the world and none of those are quite true,” Parbs says. “To me what’s more impressive about our lumber story is that we were the headquarters of the monopoly that controlled like 90% of Wisconsin, Iowa and Illinois.”

Parbs says many of the chapters in the book were generated by questions from visitors to the Sawmill Museum. Parbs used census data and other documents to chart Clinton’s history in the late 1800s.

“We were probably the richest sawmill town, but we did actually have quite a large population. There are towns out there that actually do have the most millionaires per capita, depending on the years and ones like Cheyenne, Wyoming that had eight millionaires in a town of 3000,” Parbs says, laughing. “It’s kind of hard to beat that ratio.”

In its heyday from about 1870 to 1895, the Mississippi River Logging Company and other Clinton-based companies shipped logs and boards to the east and west or south down the river. Parbs released the book in March of 2020, at the start of the pandemic, so a tour to promote the book was canceled.