You are here: Home / News / Grants are available to plant trees as part of derecho recovery 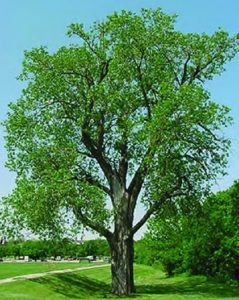 About a week is left for Iowa’s cities, counties and groups like the Boy Scouts to apply for state grants to plant trees as part of the recovery process from last year’s derecho. The state legislature is allocating $250,000 for the Derecho Community Forestry Grant Program.

Gabriele Edwards, an urban forestry program specialist at the Iowa Department of Natural Resources, says the grants will go a long ways toward helping our towns restore some of that lost beauty.

“This grant is targeting communities and public organizations,” Edwards says. “So, think local, state government, cities, municipalities. The public organizations would be more like scouting groups, county conservation, essentially any public group that would be planting trees on public property.”

The grants range from $500 to $5,000 and are to be used to buy and plant trees suitable to Iowa on publicly-owned lands. That can include all sorts of places like street right-of-ways, parks, school grounds, courthouse lawns, fairgrounds, cemeteries, libraries and trails. Trees are an underrated commodity, Edwards says, and few people seem to appreciate them until they’re gone.

“You’re going to notice, the summers are going to be hotter, no shade to hide in, no shade for your building and you’ll be paying higher energy costs to cool your home,” Edwards says. “The same is true for winter when it’s cold out, you’ll have those winds hitting your house and making it cold.”

Some Iowa communities lost more than half of their canopies in the powerful storm on August 10th of last year. As new trees are planted, Edwards says there’s an emphasis on diversity in species, as she says a diverse canopy will be a resilient canopy.

“We can notice in the communities that were hit very hard, there are certain species that did well and certain species didn’t,” Edwards says. “Maples are weaker-branched trees and they’re more likely to lose limbs in big wind storms like this, versus and an oak or a hickory that has stronger branches that can withstand that.”

She says Iowa is overplanted with maples and people should consider other options, including the black locust, honey locust and hackberry trees. Grant recipients are required to provide a dollar-for-dollar cash match as part of the program.

The deadline for applications is August 20th.