You are here: Home / News / Many happy to see return of Iowa State Fair 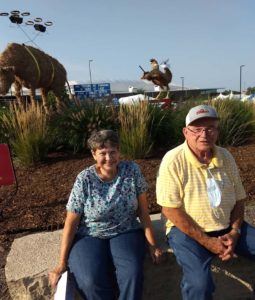 People were lined up to get into the Iowa State Fairgrounds Thursday as the event returned from the pandemic layoff.

The fairgoers were anxious to get back to the familiar sights, sounds, and tastes of the fair. And everyone had the same opinion on the year without it — one woman saying it “was kind of a bummer.”

Denny Reichardt of Corning says last year was “bad, but safe.” He and his wife Betsy had been to the Iowa State Fair for some 30 years straight before last year’s cancelation.

Reichardt says everyone appeared as anxious as they were to get in. He says they ended up waiting on Grand Avenue to get in and cars were backed up about a quarter-mile. They like to get to the fair early and on opening day.

“Absolutely, we are first-dayers all along,” Denny says. Betsy was asked what her favorite thing is to do at the fair and she responded “Just look.” Denny says their strategy is to get there early and leave after lunch before things get too hot.