You are here: Home / News / UNI program helps the military save gallons of paint 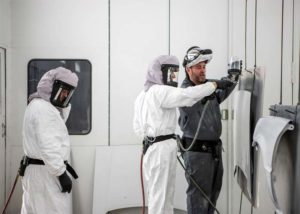 A painter training program created at the University of Northern Iowa’s Waste Reduction Center was recently awarded contracts for 20 military sites across the country.

Chris Lampe oversees the virtual reality military training program, which he says was developed after a lot of study. “We figured out the proper speed, distance, and overlap to achieve the greatest efficiency when you are spraying these coatings on military assets and components,” Lampe explains. “And with the virtual technology you can practice over and over again, so he or she can master their spray technique.”

The program is called “Spray Technique Analysis and Research for Defense” or STAR4D. Lampe says part of the study found ways to measure the proper thickness for the paint. “Both when the coating is wet and when the coating is dry. So we use those tools and measurements as part of the course as we evaluate the painters as they go through to make sure they are spraying the correct wet film paint thickness and that will correspond to the correct dry film thickness,” Lampe says.

He says they found 50% of the paint was being lost before the training. And he says increased paint use from an inexperienced or untrained person creates more waste beyond the paint itself. “More paint booth filters that have to be plugged more quickly and have to be changed out, those types of things. So it can be very costly to a facility if they have untrained painters doing the work,” he says.

If you spill a little paint when you are freshening up your bedroom it’s not that costly. But using too much paint on military vehicles can get expensive very quickly. “Typically it can range anywhere from say 150 to 250 dollars per gallon. And for instance, in a Blackhawk (helicopter) it takes six to eight gallons of coating to properly coat one of those,” Lampe says. “So you can imagine if you are wasting half that material that’s getting sprayed — can add up quickly.”

Lampe says they’ve also done a lot of work with civilian companies to paint trucks and tractors more efficiently. “And although their coatings may change from military to say agriculture-based — they still using a lot of time the same type of spray gun or spray equipment. And so, those applications on the ag side of things can be just as wasteful as the military side if you don’t have properly trained people,” Lampe says.