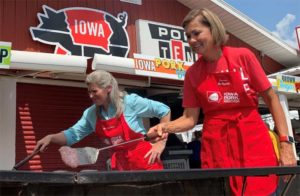 Ernst has been working to secure Special Immigrant Visas for Afghans who helped the U.S. military.

It’s unclear how many could be resettled here or when they might start arriving. Governor Reynolds said the Polk County Board of Supervisors is working to find sponsors and housing.

“We’re taking all of those elements and making sure we’re able to go with it and we’ll do everything we can to support the senator’s efforts,” Reynolds said. “but we’re on board and we’re ready to go.” 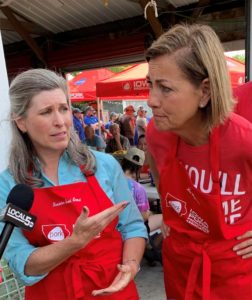 This spring, Reynolds said Iowa would not accept unaccompanied children who had crossed into the U.S. from Mexico. Reynolds said resettlement of Afghan refugees is a different process.

In 2015 after a terrorist attack in Paris, Governor Terry Branstad directed state agencies to stop resettlement efforts for Syrian refugees. Some Republicans in Congress have said Afghan refugees are a similar safety risk to America. Ernst, a Republican, said Iowa has a history of welcoming refugees of war, dating back to the 1970s when Republican Governor Robert Ray led the effort to resettle Tai Dam refugees from Southeast Asia.

“These Afghan refugees that are coming out, they are qualifying for Special Immigrant Visa status. They are going through the proper process to be vetted to come into the United States,” Ernst said, “and they are those that have supported our military through two decades through the global war on terrorism and our counter terrorism efforts in Afghanistan.”

Ernst said Afghan refugees are medically screened once they arrive on U.S. soil and many are relocating to California, Virginia and Wisconsin where there are large populations of former Afghan residents. Reynolds said Iowa is “on board and ready to go” once the State Department starts coordinating flights of Afghans into the state.

“I think the message that I want to relay to Iowans is we want to be a partner,” Reynolds said. “We want them here.”

Reynolds and Ernst made their comments Wednesday afternoon during a joint news conference at the Iowa State Fair.