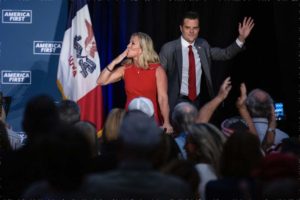 Republicans from Georgia and Florida who held an “America First” rally in Des Moines tonight say they’ll be back to campaign for Donald Trump’s return to the White House.

“Iowa, will you caucus for Donald Trump in 2024?” Florida Congressman Matt Gaetz asked the crowd near the beginning of his speech and drew cheers.

Gaetz also suggested if Republicans retake the majority in the U.S. House in the 2022 election, Trump should be returned to power — as House Speaker.

“The Bushes, the Cheneys, the Paul Ryans, the Mitch McConnells, the neocons very much wanting to take back control,” Greene said. “They want to tell you that Trump was just a blip on the radar.”

Greene, who was suspended from Twitter last week for posting what a company spokesman described as “misleading information” about Covid vaccines, spoke first and called Democrats, the media and big tech “the new axis of evil.”  She joined Gaetz on stage after his speech and, after prompting from Gaetz, Greene said she plans to submit articles of impeachment against President Biden tomorrow.

“I believe in firing people when they’re corrupt and they do a bad job and Joe Biden is failing America and he needs to be impeached,” Greene said, to cheers.

Although she did not mention U.S. Senator Chuck Grassley by name, Greene vowed to support primary opponents of fellow Republicans like Grassley who voted for the bipartisan infrastructure bill that cleared the Senate this month and who vote for the plan in the U.S. House. Greene also cautioned against a project Republican Senator Joni Ernst and Republican Governor Kim Reynolds are leading that would see Afghan refugees with Special Immigrant Visas resettled in Iowa.

“I have a problem with some of my colleagues because all they’re talking about is putting Afghans before Americans…It should be Americans first,” Greene said, to applause. “We are grateful for our Afghan allies that helped our American military. We are grateful, but they need to be vetted somewhere else before any and every Afghan is just welcomed in our country.”

Neither the Iowa GOP’s chairman nor any Republicans who hold statewide or federal office attended tonight’s rally. In April, a top Republican in the U.S. House said party leaders would “react and take action” if allegations that Gaetz has been involved in sex trafficking lead to charges.