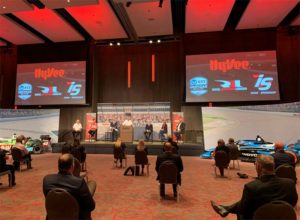 It was announced today that Indy Car racing will return to Newton. (RI photo)

Indy Car racing will return to the Iowa Speedway in Newton. Hy-Vee CEO Randy Edeker announced this morning the company will be the lead sponsor of races in mid-2022.

The Hy-VeeDeals.com 250 will be on Saturday, July23, followed by the Hy-Vee Salute to Farmers 300 on Sunday the 24th of July. Edeker said sponsoring Indy Car racing at the Newton track will be a showcase for Iowa, since the races will be broadcast internationally.

“We think that we have discovered the next best opportunity for Hy-Vee — for our people, for our state, for our customers,” Edeker said, “and we’re excited to dive in.”

“I think it’ll come as no surprise that I’m the happiest mayor in the state of Iowa today,” he said during a news conference at Hy-Vee corporate headquarters in West Des Moines.

There had been concern the Iowa Speedway might close and the mayor said he’s been working for the past 14 months to secure Indy Car racing’s return to Newton.

“That was frankly our best hope to resurrect the Iowa Speedway and you can see today, with Hy-Vee’s participation, we are so pleased to be able to announce that,” Hanson said.

Governor Reynolds is calling on other Iowa businesses and organizations to contribute sponsorships in support of the racing weekend in Newton. Roger Penske, founder of the Penske Corporation and owner of the Indy Car Series, said four of the drivers who’ve won on the oval track in Newton have won the Indy 500.

“We need to have tracks like Iowa because as we come to Indianapolis every year, we can’t just be running on street circuits or permanent road circuits. We need to come to places where people run wheel-to-wheel and side-by-side,” Penske said. “When you look at the statistics, over 600 passes at some of the races we’ve had here over the years, which is just amazing when you think about the competition.” 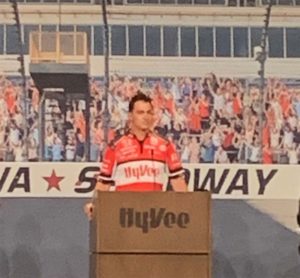 “Not only that — it’s just a great race track,” Rahal said. “We’ve seen guys — Simon Pagenaud, who drives for Roger, started last a couple of years ago and ended up winning the race. Most of the places we go to that is not going to be an opportunity unless you’re extremely lucky. Here, there’s a great chance to go out there and pass a ton of cars.”

Rahal has been driving an Indy Car that’s co-sponsored by Hy-Vee. Hy-Vee’s CEO announced this morning the company will be the sole sponsor of Rahal’s car.