You are here: Home / Agriculture / EPA ban of chlorpyrifos pesticide has growers looking for alternatives 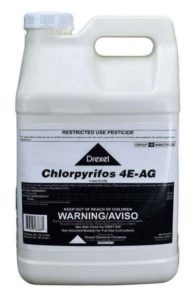 The U.S. Environmental Protection Agency is revoking all uses of a pesticide called chlorpyrifos, which was used on corn, soybeans, and other row crops.

“There’s a lot of work that we have to do in making sure that we’re raising the crop that we want to and having lots of opportunities to use some products,” Jorgenson says. “It’s concerning to farmers and it’s going to be concerning in policy because we have to keep those tools as best we can and manage them the correct way to make sure we can produce a crop that we want to raise.”

Jorgenson says any decisions made by the EPA or other government agencies regarding chemicals and what can be used must be based on sound science. Jorgenson says there are other treatment options growers can consider using, now that chlorpyrifos is out of the picture.

“I hope that by the time we have those discussions with either our chemical providers or our agronomists, what is going to work and what’s been showing to work the best,” Jorgenson says. “Those things are going to come up, there’s no question about that. We’re going to be talking about that soon and that’s for next year’s crop already. There’s a lot of management we’re doing right now as to what we’re going to do for 2022.”