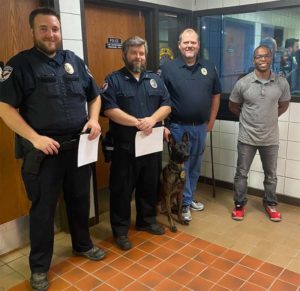 Pepper, a nearly 15-month-old Dutch Shepherd, completed a certification process earlier this month and works as a K9 officer for Estherville Police.

Sergeant Matt Reineke, Pepper’s handler, says the training paid off last Monday during a search for a missing child in a neighboring community. “By the time we arrived on scene, they had been looking for over two hours for this missing child,” Reineke says. “…Was brought to the house where the child was last seen and talked to the parent and I obtained an article of clothing that was just the child’s a no one else had tampered with and I went to where the child was last seen in the yard playing and let Pepper smell that article of clothing for about 20 seconds and gave her the command basically to track.”

Reineke says it took Pepper about five minutes to find the boy.

“She went around the yard. Eventually she put her nose to the ground and picked up scent and took off down the road a little bit and then crossed the road toward a corn field,” Reineke says. “We went through the corn for a short time and then back out of the corn and continued down a fence line into a real thick wooded fence line — tall grass — where we tracked that for a while and then she went into the deep part of the fence line and stopped…so I went to investigate and, sure enough, it was the missing child.”

The Estherville Police Department has had trained K-9 officers for about 20 years. Pepper replaces a police dog named Max who died unexpectedly after 18 months of service with the department.