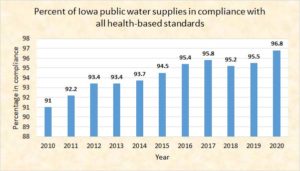 The DNR’s Corey McCoid says the number of systems meeting all health-based standards was the highest in 25 years.

“This is all based on what would be the finished water that the water plants produce in the local communities, or other water supplies. Some of those would be based on groundwater or wells, and some of them would be based on surface water,” McCoid says.

He says most of the larger cities in the state get their water supply from surface water. McCoid says they keep a close eye on the product they produce. “A lot of communities are doing testing on a daily basis. And then for compliance purposes that may be monthly, it may be quarterly. Or for some of the contaminants that we don’t sample as often, it may be over a six-year period,” according to McCoid.

It just depends on what we are looking for. Some more of your acute contaminants may be sampled on a much higher frequency than some of the other contaminants.” He says some of the key contaminants haven’t changed.”Bacteria is always one of the first ones that we take a look at — as well as your nitrates and nitrites in Iowa,” he says.

McCoid says the history he has seen shows Iowa ranks highly across the country.
“I would say we are in the top ten percent of states across the country for compliance numbers. I haven’t seen the recent statistics — but I know that is how we have been categorized in the past,” McCoid says. You can see the full report on the Iowa DNR website.