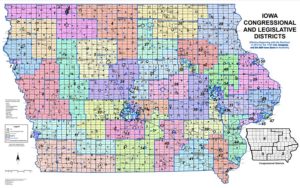 The current legislative map will be redone.

Three virtual rather than in-person public hearings are being planned for next month, to give Iowans a chance to comment on proposed maps that will change the boundaries of Iowa’s congressional and legislative districts.

The Legislative Services Agency is using 2020 Census data to align district boundaries based on population changes and it plans to present legislators with a new set of maps by Thursday, September 16th. Iowa’s Temporary Redistricting Advisory Committee is planning for public hearings to be held the following Monday, Tuesday, and Wednesday. Two will be at night. One will be in the afternoon.

Members of the Advisory Committee says holding those forums online rather than at sites around the state will give more Iowans a chance to speak. Iowans may submit written comments as well. By law, at least three public hearings must be held before legislators can vote on the redrawn district maps.