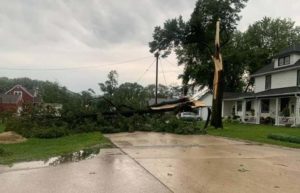 Fayette County Emergency Management estimated that winds ranged from 90 to 100 miles-an-hour in the area — and the roof of Baron’s Motor Supply in Oelwein was peeled back. Manager Russ McNamara was inside when the storm hit and described it to KCRG TV.

“All of sudden, you could hear the roof start to peel back up, and water started coming in, and you could see the wind continuing to go like that, so you just knew things were continuing to go south,” McNamara says. McNamara has managed the store for 45 years and says the storm hit quickly. “Once it came up it was like two seconds,” he says.

Thousands of dollars in inventory in the store is now covered by plastic as water leftover from the rain continues to drip into the building. While McNamara said he wasn’t sure when they would be able to make the repairs to the roof, he told KCRG TV he was thankful for the people helping to cover the expensive car parts and that no one at the store was hurt during the storm.
“We were lucky, we are sitting here talking to you,” McNamara says.

More than 2,300 homes were still without power in the Waterloo area this morning,  and storm damage caused the cancellation of classes today in the Wapsie Valley School District. Bleachers at Wapsie Valley High School’s baseball field northwest of Fairbank were destroyed by straight-line winds, which also destroyed farm buildings. Dozens of trees are also down in the small Fayette County community of Oran.