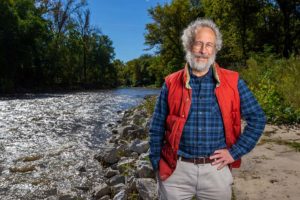 A new report on global climate change is being released with help from researchers at Iowa State University.

The study from the Intergovernmental Panel on Climate Change had more than 200 authors from a dozen chapters around the globe. William Gutowski, an ISU professor of geological and atmospheric sciences, says the report was three years in the making.

He calls it sharp and authoritative. “We have to review all of the scientific literature that’s out there that’s relevant to our chapter and we have to discuss it, decide what we learned from it, what we think is good information and what we think maybe is not so important,” Gutowski says, “and then we get reviewed by people on the outside. I think my chapter had to respond collectively to over 5,000 review comments.”

ISU’s chapter covered central North America, where weather extremes in the past year ranged from brutal cold in Texas last February to the drought in Iowa and across the Midwest. Gutowski expects continued weather extremes.
“When we look at the future scenarios, there’s different options that we consider,” Gutowski says. “One would be, just keep letting things go along as they have been. Other scenarios we consider are ways that we might control the rise in greenhouse gases, maybe even start to have the level of greenhouse gases go down.”

It all comes down to what actions humans may take, he says, as to how quickly the changing climate may be impacted.
“Trying to change things, it’s a long, slow process. It’s like trying to turn a ship around. You don’t just do it overnight,” Gutowski says. “Nonetheless, we can do things now that set the stage for a much better future for our children and their children down the road with actions that we start to take right now.”

Gutowski says the report is a wake-up call to do something and it has to involve countries around the world. Iowans can help to stave off climate change, he says, by doing things like conserving electricity and gasoline, and promoting wind and solar power.