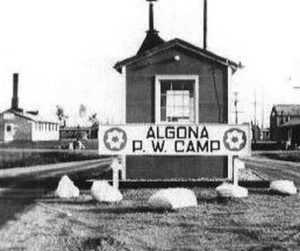 Filming is scheduled in November, in Kossuth County, for a movie about a World War II camp near Algona for German prisoners. The movie’s crew was in the area last weekend, scouting possible filming locations.

D. J. Perry is the CEO of Collective Development and author of the screenplay for “Silent Night in Algona.” “If we find something and then the owners are agreeable to having us shoot there, sometimes it’s actually deconstructing or taking modern stuff out temporarily,” he says. “Sometimes it’s set directing and adding stuff to a location.”

Perry says they’re looking for homes and buildings that were around 77 years ago — during the fall and early winter of 1944. The crew was in Whittemore and Lone Rock this past weekend, searching for places to film.

“We’ll be back in end of October with our art team and starting to turn everything into 1944,” he says.

The film will focus on a four month period in late 1944, from September through December.

“It’s about unity, it’s about patriotism — a lot of themes that are very relevant to what’s going on now as well and it’s important that things aren’t forgotten from the past,” he says. “As we know, we are doomed to repeat mistakes if you don’t learn from your past.”

Lead actors for the film have been cast, but Perry says they’ll be looking for area residents to be extras and assist in other ways.

“When you see those end credits of the movie — all the special thanks and all the people involved, that’s what it takes,” Perry says. “It takes a small army to make these things happen.”

Perry says filming will take about three weeks and he expects the movie to be released in 2022. Perry’s company is based in Michigan and announced this summer two German actors will play lead roles in the film. Another actor who had role in two tv dramas — St. Elsewhere and Tour of Duty — will portray the Kossuth County Sheriff in the film.

Algona was notified in 1943 that a POW camp would be built in the county and an estimated 10,000 German soldiers passed through until it was dismantled in 1946. A 20-foot by 60-foot nativity scene carved by six German POWs remains in Algona.