You are here: Home / News / Man dies after truck submerged in Missouri River during heavy rainstorm 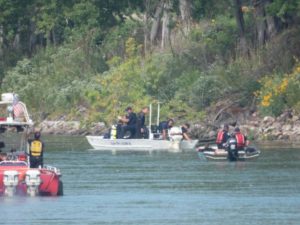 A man has died after his truck plunged into the Missouri River during heavy rain in Sioux City Saturday night.

Police and rescue units were dispatched to the riverfront around 10:30 p.m. where the driver of a southbound pick-up apparently lost control on Interstate 29 and went off the road and into the river.

The vehicle was fully submerged and efforts by rescuers to retrieve the truck from the water were unsuccessful during the overnight hours due to river and weather conditions.

Divers were successful in recovering the truck around 11:20 a.m. Sunday and the body of the driver was found in the vehicle. A positive identification has been made and the victim’s name will be released later Monday.